UMAP is a general purpose manifold learning and dimension reduction algorithm. It is designed to be compatible with scikit-learn, making use of the same API and able to be added to sklearn pipelines. If you are already familiar with sklearn you should be able to use UMAP as a drop in replacement for t-SNE and other dimension reduction classes. If you are not so familiar with sklearn this tutorial will step you through the basics of using UMAP to transform and visualise data.

First we’ll need to import a bunch of useful tools. We will need numpy obviously, but we’ll use some of the datasets available in sklearn, as well as the train_test_split function to divide up data. Finally we’ll need some plotting tools (matplotlib and seaborn) to help us visualise the results of UMAP, and pandas to make that a littl easier.

The next step is to get some data to work with. To ease us into things we’ll start with the iris dataset. It isn’t very representative of what real data would look like, but it is small both in number of points and number of features, and will let us get an idea of what the dimension reduction is doing. We can load the iris dataset from sklearn.

The description tells us a fair amount about the dataset – it consists of measurements of petals and sepals of iris flowers. There are 3 species of flower represented, each with 50 sets of measurements. Visualizing this data is a little bit tricky since we can’t plot in 4 dimensions easily. Fortunately four is not that large a number, so we can just to a pairwise feature scatterplot matrix to get an ideas of what is going on. Seaborn makes this easy (once we get the data into a pandas dataframe). 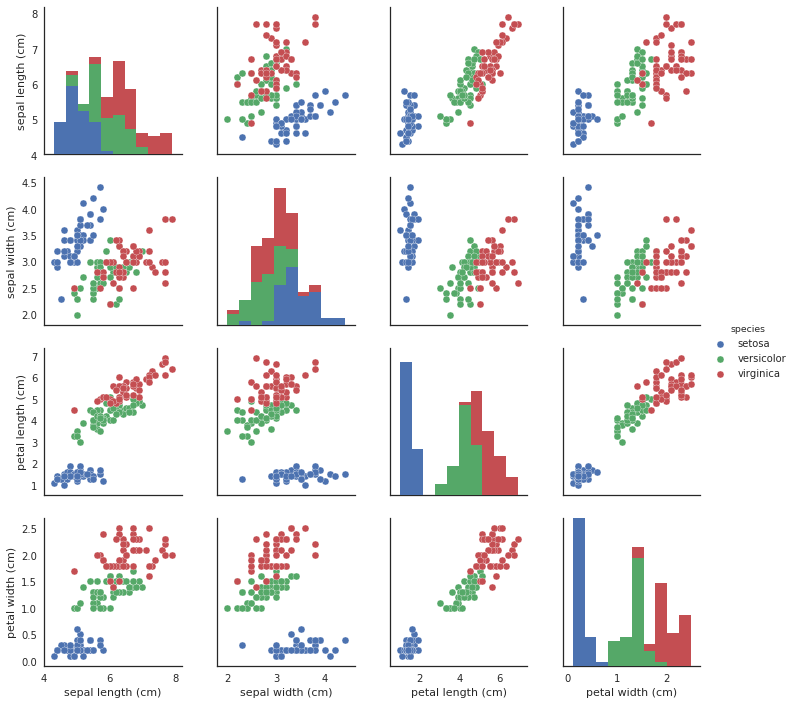 This gives us some idea of what the data looks like by giving as all the 2D views of the data. Four dimensions is low enough that we can (sort of) reconstruct what the full dimensional data looks like in our heads. Now that we sort of know what we are looking at, the question is what can a dimension reduction technique like UMAP do for us? By reducing the dimension in a way that preserves as much of the structure of the data as possible we can get a visualisable representation of the data allowing us to “see” the data and its structure and begin to get some inuitions about the data itself.

To use UMAP for this task we need to first construct a UMAP object that will do the job for us. That is as simple as instantiating the class. So let’s import the umap library and do that.

Now we need to train our reducer, letting it learn about the manifold. For this UMAP follows the sklearn API and has a method fit which we pass the data we want the model to learn from. Since, at the end of the day, we are going to want to reduced representation of the data we will use, instead, the fit_transform method which first calls fit and then returns the transformed data as a numpy array.

The result is an array with 150 samples, but only two feature columns (instead of the four we started with). This is because, by default, UMAP reduces down to 2D. Each row of the array is a 2-dimensional representation of the corresponding flower. Thus we can plot the embedding as a standard scatterplot and color by the target array (since it applies to the transformed data which is in the same order as the original). 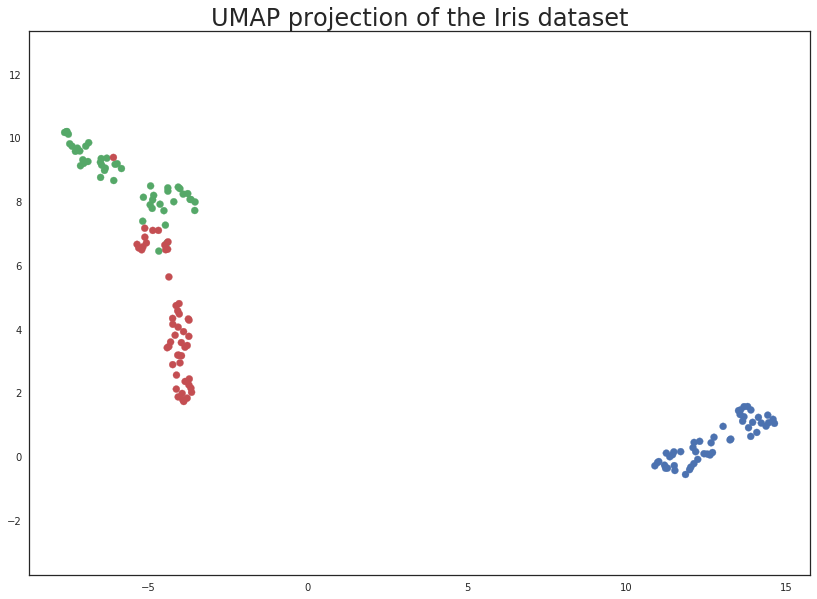 This does a useful job of capturing the structure of the data, and as can be seen from the matrix of scatterplots this is relatively accurate. Of course we learned at least this much just from that matrix of scatterplots – which we could do since we only had four differnt dimensions to analyse. If we had data with a larger number of dimensions the scatterplot matrix would quickly become unwieldy to plot, and far harder to interpret. So moving on from the Iris dataset, let’s consider the digits dataset.

First we will load the dataset from sklearn.

We can plot a number of the images to get an idea of what we are looking at. This just involves matplotlib building a grid of axes and then looping through them plotting an image into each one in turn. 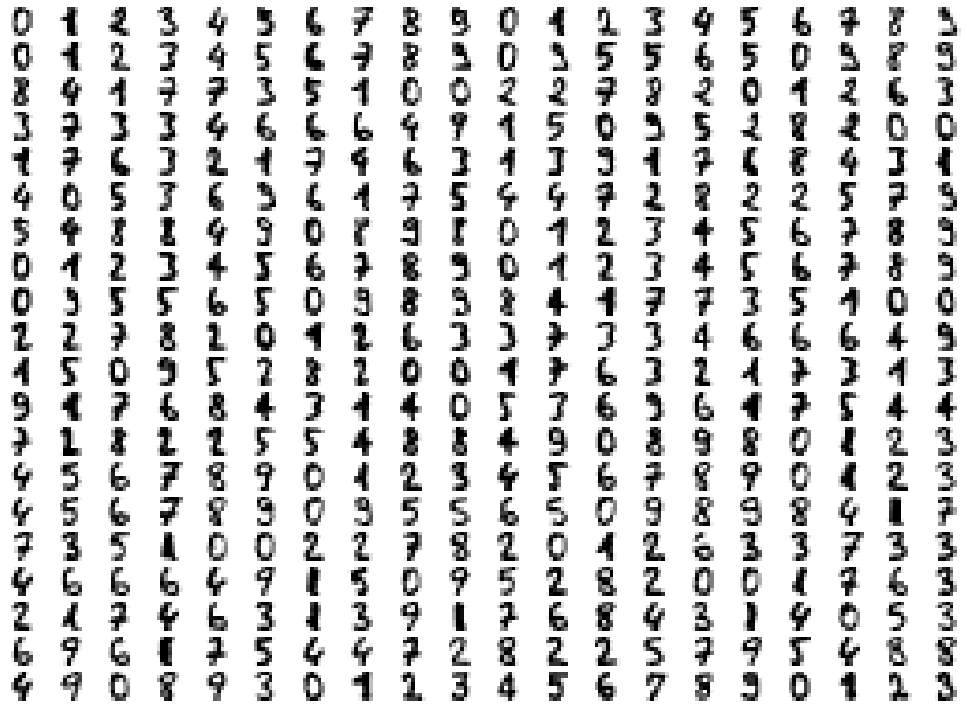 As you can see these are quite low resolution images – for the most part they are recognisable as digits, but there are a number of cases that are sufficiently blurred as to be questionable even for a human to guess at. The zeros do stand out as the easiest to pick out as notably different and clearly zeros. Beyond that things get a little harder: some of the squashed thing eights look awfully like ones, some of the threes start to look a little like crossed sevens when drawn badly, and so on.

Each image can be unfolded into a 64 element long vector of grayscale values. It is these 64 dimensional vectors that we wish to analyse: how much of the digits structure can we discern? At least in principle 64 dimensions is overkill for this task, and we would reasonably expect that there should be some smaller number of “latent” features that would be sufficient to describe the data reasonably well. We can try a scatterplot matrix – in this case just of the first 10 dimensions so that it is at least plottable, but as you can quickly see that approach is not going to be sufficient for this data. 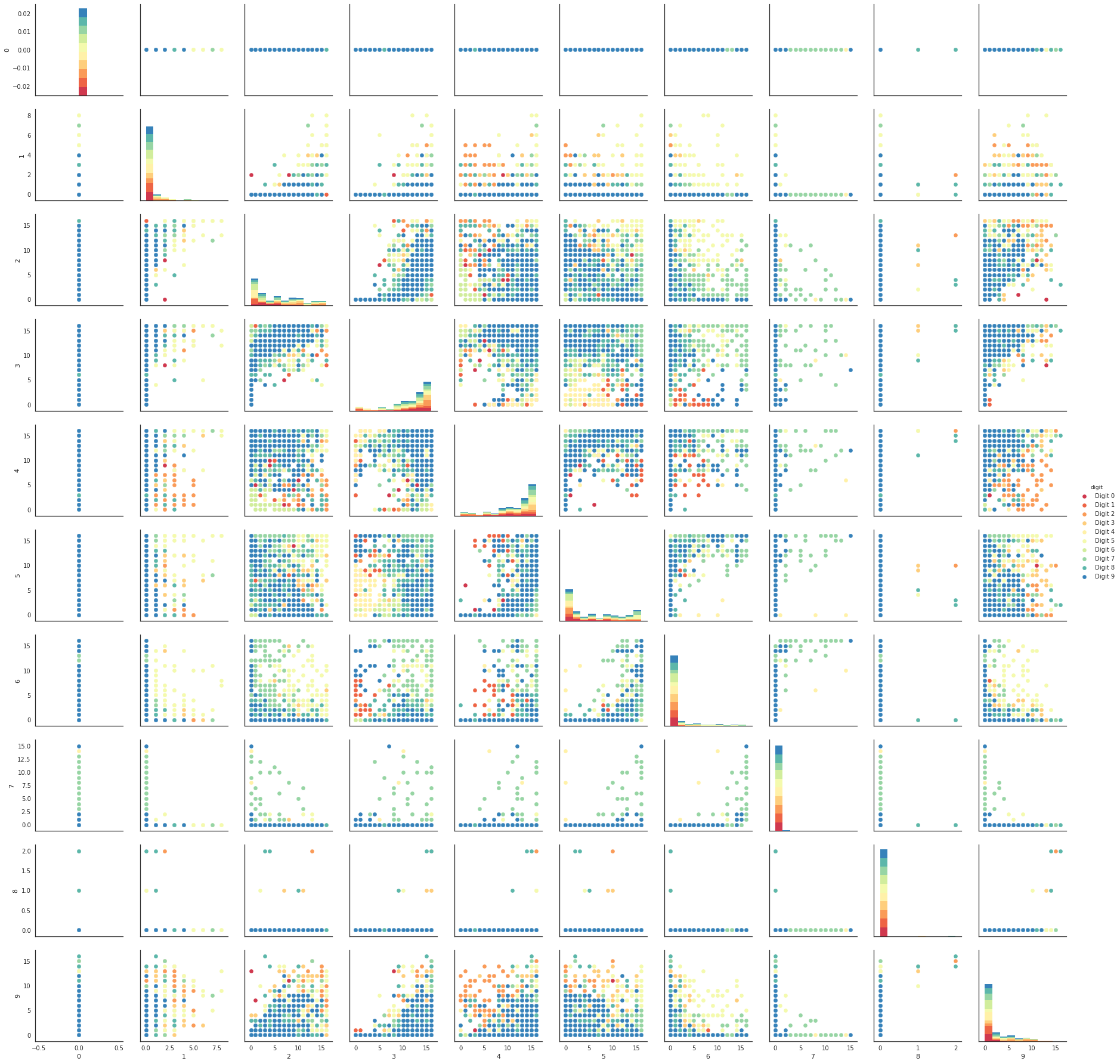 In contrast we can try using UMAP again. It works exactly as before: construct a model, train the model, and then look at the transformed data. TO demonstrate more of UMAP we’ll go about it differently this time and simply use the fit method rather than the fit_transform approach we used for Iris.

We now have a dataset with 1797 rows (one for each hand-written digit sample), but only 2 columns. As with the Iris example we can now plot the resulting embedding, coloring the data points by the class that theyr belong to (i.e. the digit they represent). 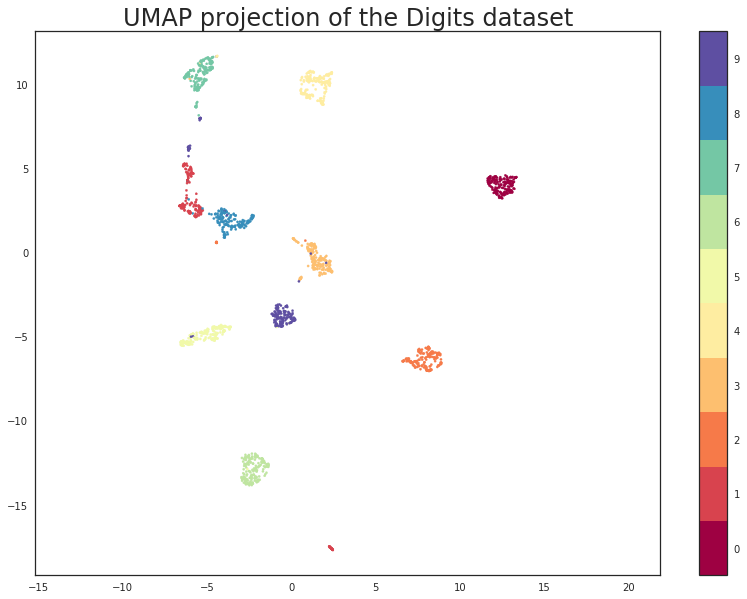 We see that UMAP has successfully captured the digit classes. There are also some interesting effects as some digit classes blend into one another (see the eights, ones, and sevens, with some nines in between), and also cases where digits are pushed away as clearly distinct (the zeros on the right, the fours at the top, and a small subcluster of ones at the bottom come to mind). To get a better idea of why UMAP chose to do this it is helpful to see the actual digits involve. One can do this using bokeh and mouseover tooltips of the images.

First we’ll need to encode all the images for inclusion in a dataframe.

Next we need to load up bokeh and the various tools from it that will be needed to generate a suitable interactive plot.

Finally we generate the plot itself with a custom hover tooltip that embeds the image of the digit in question in it, along with the digit class that the digit is actually from (this can be useful for digits that are hard even for humans to classify correctly).